If you love the environment and hate excessive packaging…get ready to be amazed, angered and/or shocked. Maybe all at the same time.

It’s no secret that many producers prioritise profit over the environment when it comes to how they package their goods. With that being said, some of the examples below don’t even seem like they could possibly be more profitable given how much unnecessary waste they exhibit. Some of these are just minblowing choices that make you wonder what these producers and shipping companies were even thinking. 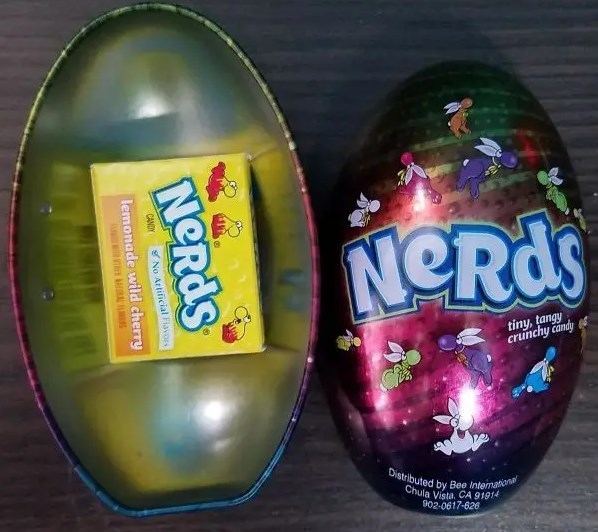 At first, the individual who received this giant box thought that they had received an empty box! As it turns out, all the the box contained was a tiny pack of batteries, hidden under one of the bottom flaps.

This tiny package of batteries was so small it was almost imperceptible. It came in a box nearly 20 times its size. Next time you see a big box on your front porch, don’t expect to find something very big in it. It may just contain a small pack of batteries. 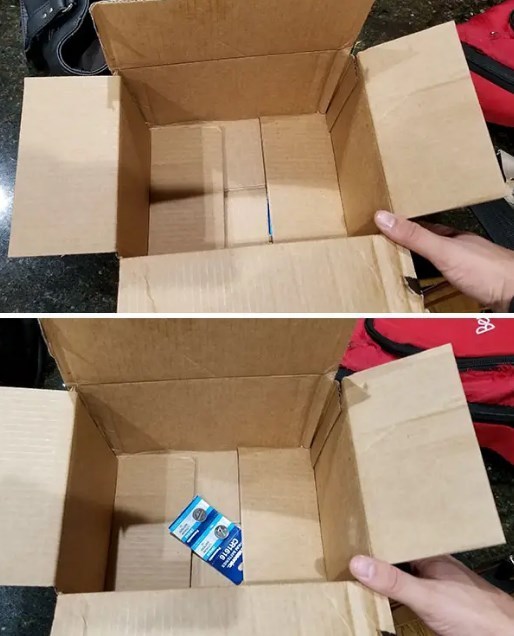 2) Orange you Just a Little Overpackaged?

Apparently this packager doesn’t like Mother Natur’s original packaging. Instead of simpy selling the orange in it’s peel, they unpeeled it and put it into a plastic container. Double Fail. 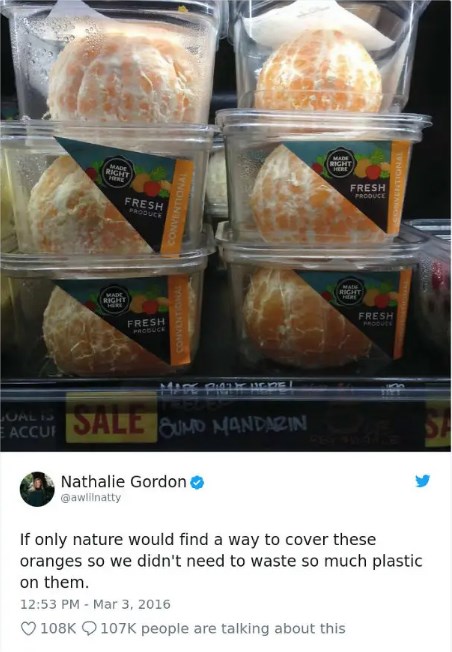 Nerds are supposed to be smart. Whoever came up with this idea to put a package inside another package was clearly having an off day.

Instead of just selling the box, or filling up the larger egg-shaped package, this one falls flat right in the middle — too much wasted space, not enough candy.

4) A Glass More Than Half Empty

Not only is this cute cup wasted space, it might even be deceptive advertising.

While a purchaser might assume the whole cup is full of candy, in fact it is just the clear plastic part at the top. Clearly, this person was a little disappointed when they opened their treat and found that it only contained about 1/3 of what they thought they had bought. 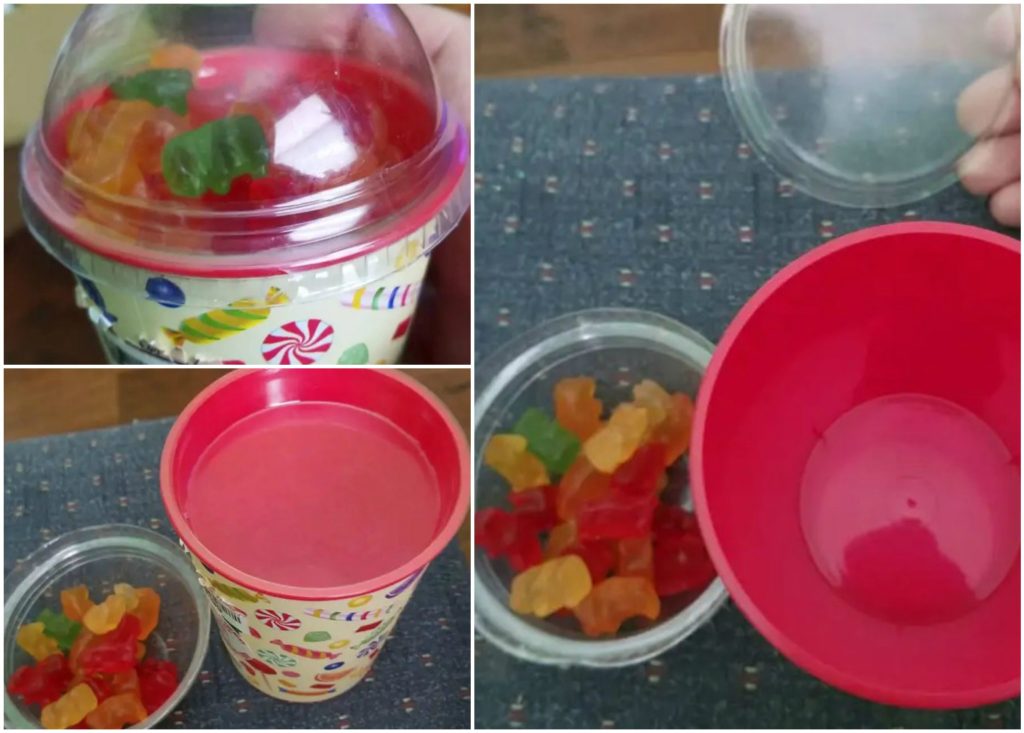 5) Not Enough Tomatoes, Too Much Packaging!

Some food manuals recommend that food items should be packed individually to prevent them from sticking together or acquiring mold, but this just seems like overkill.

If someone wants to purchase 2 or 3 tomatoes, at this store that means they’re also getting 2 or 4 styrofoam plates with plastic wrap to match. Surely there’s a more efficient way without breaking health guidelines? 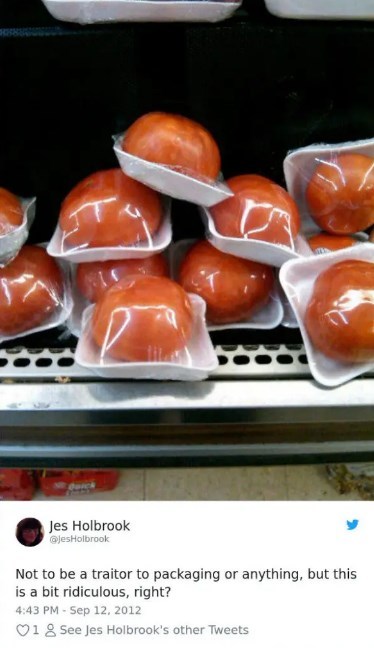 Once again, these packagers tried to outsmart mother nature. 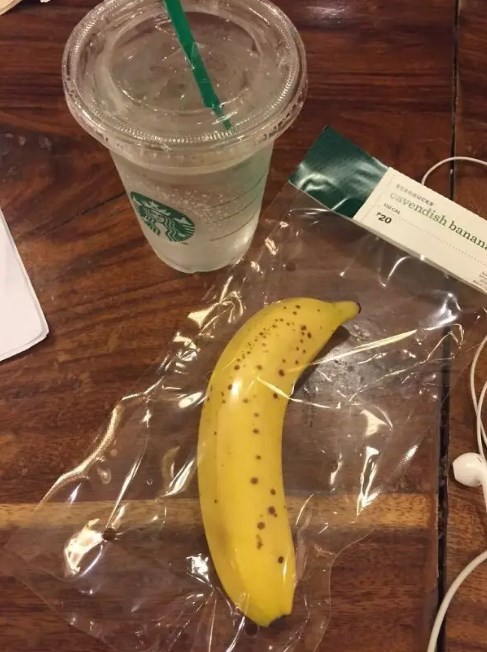 You might think this box was full of 16 jars, but unfortunately this was one luxury box for 1 very VIP jar.

We get that it’s important glass jars don’t break. Some protective packaging is perhaps required. But doesn’t this just seem like a little much to ship one single jar? They don’t have smaller boxes? Couldn’t they use less protective gear here? So many questions, so few answers… 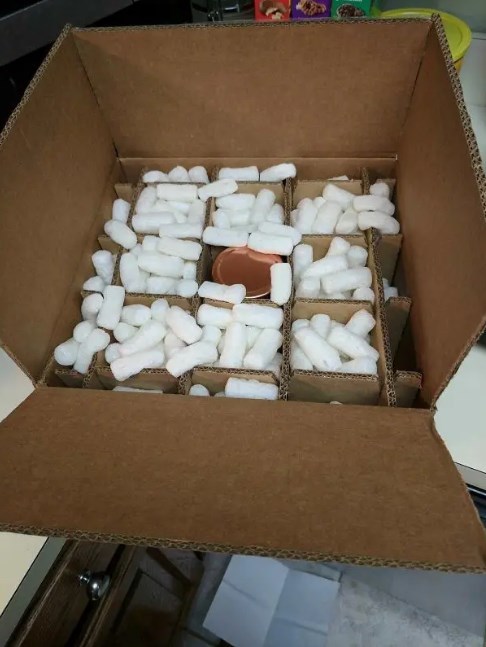 8) The Candy Of Diminishing Returns

Every layer you open gets you a little less candy…

To sell 1 large bar, they must have individually wrapped over 30 different pieces of candy. This is the opposite of being waste-conscious with your packaging. It’s almost like a Russian Doll of candy bar — each layer gets a little bit smaller (but the packaging keeps going up!). 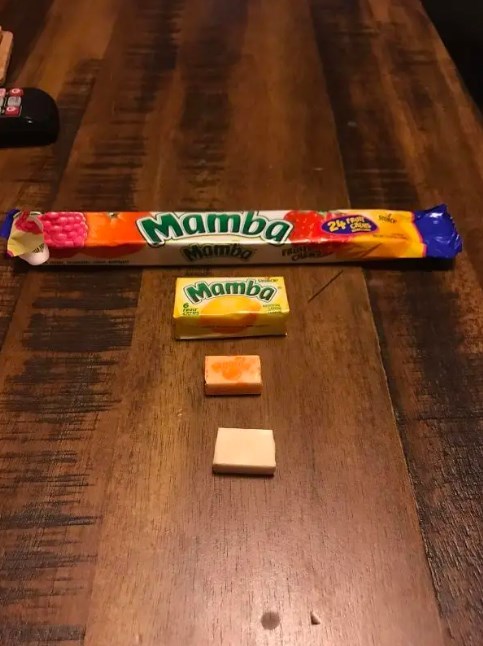 Nobody wants to receive their charging cable broken, but does that mean it needs a box and pacakaging 20x larger than it is?

Once again, it’s just shocking that companies who know they ship small products don’t have smaller boxes. On top of that, all the extra air they left in that box just makes it MORE likely to break before arrival. 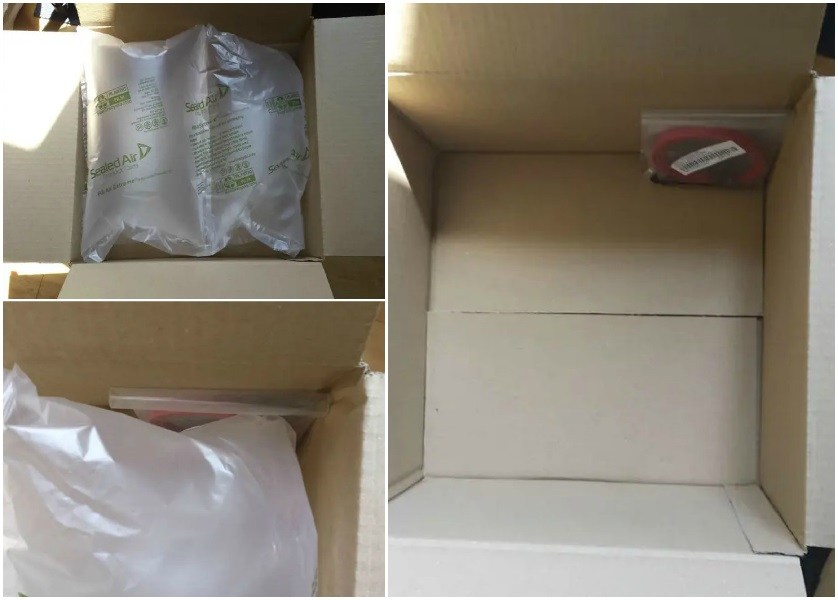 When a company ships out packaging equipment, how do they wrap their products? Apparently with MORE shipping products…

You wouldn’t think bubble wrap needs to be insulated, but here you have the proof. It’s packaging inside more packaging — Inception! 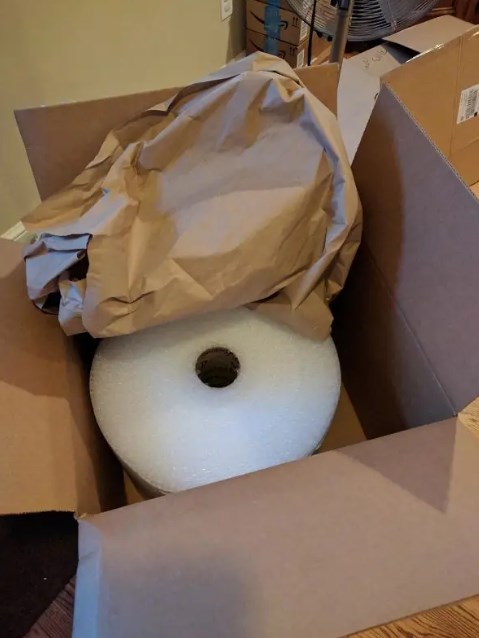 I’ve never known how much I needed ONE potato until seeing this one individually wrapped.

Just like the tomatoes and bananas above, this just seems like one of those items that dont’ need to be individually wrapped. Another example of marketers maybe getting ahead of themselves and leaving the environment behind. 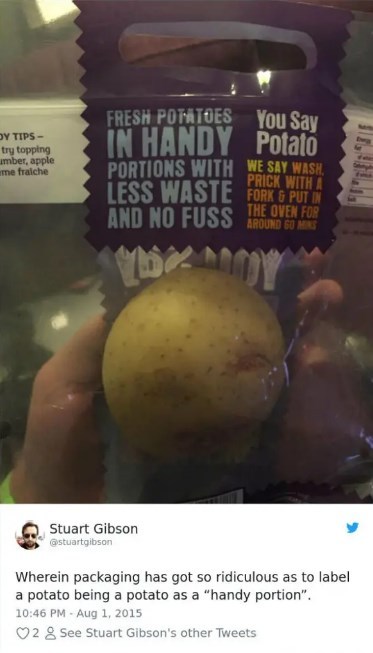 If you’re going to sell one pack of 3 chicken breasts…why do the 3 breasts need to be individually wrapped?

Maybe health standards are at play here, but my chicken doesn’t come individually wrapped so i can’t understand why these need to wrapped that way? 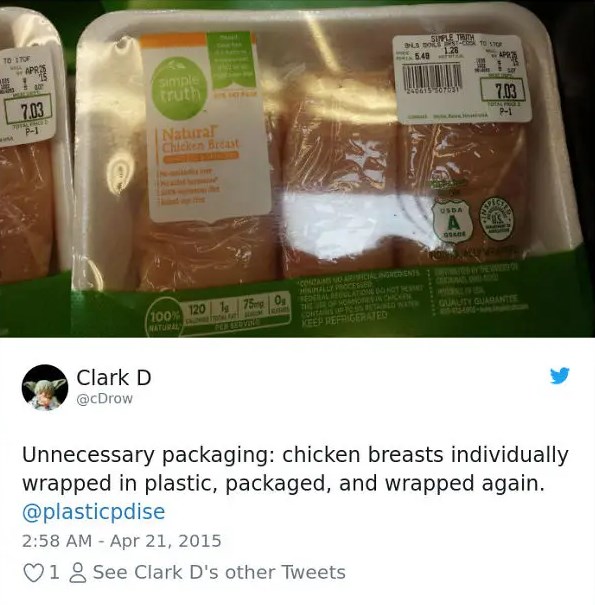 If you’ve ever needed 1 single lime leaf, this is the product  for you!

Seriously though, it’s hard to imagine this being an efficient purchase for anyone. Surely there are more effective ways to sell lime leaves. 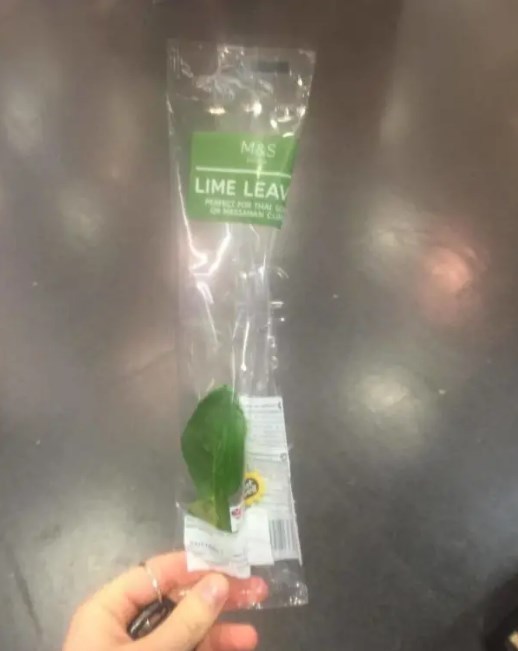 14) Why Not Get Some from The Farmer’s Market?

We understand not everybody wants to get a FULL watermelon, but this just seems like too much packaging for such a small product.

Word to the wise — fruit trastes MUCH better when you unpeel it yourself (rather than eating something that was probably peeled days or weeks ago before being vacuum-sealed.

15) How Unnecessary Is That?

When you’re double-wrapping something that is already hermetically sealed like a can…you need to start asking yourself some questions.

Of all the pictures on this list, these individually wrapped Coca-Cola cans might be the biggest head scratcher — what were these distributors thinking?? 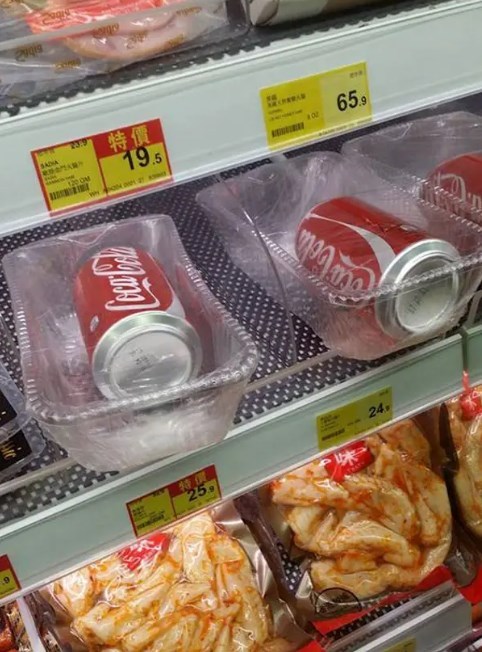 16) A Little Something Extra

Who doesn’t love a little extra gum? What WE don’t love is the unnecessary packaging.

We think it’s awesome that they sold these packs of 4 gum on discount (presumably), but why couldn’t they just put a single sign that said ‘4-for-1$’ instead of individually packaging 4 packs of gum? 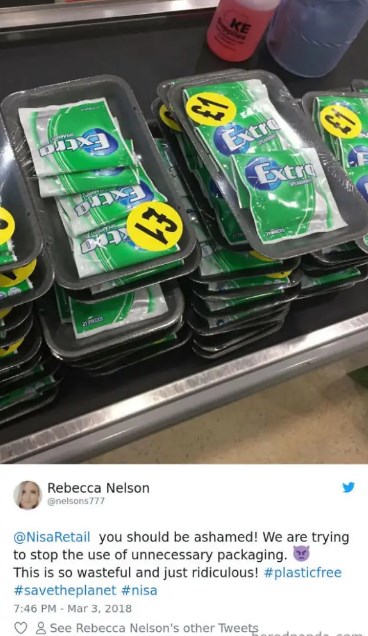 At no point in the production line could this be seen as a good idea. Those packages were clearly designed specifically for that product, and they are clearly about 3 or 4 times too big. 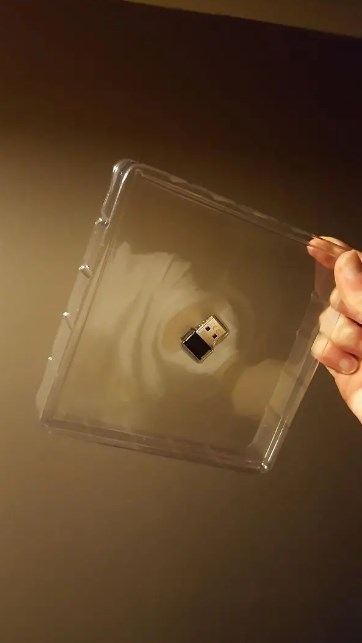 Another example wehre you think you’re getting an awesome package, only to be disappointed that it’s a USB stick.

Long story short, as much as we vocalize how much we care about the environment, CLEARLY some packagers haven’t quite understood the immense task at hand. A great place to start would be solving these ridicucously unnecessary packaging techniques! 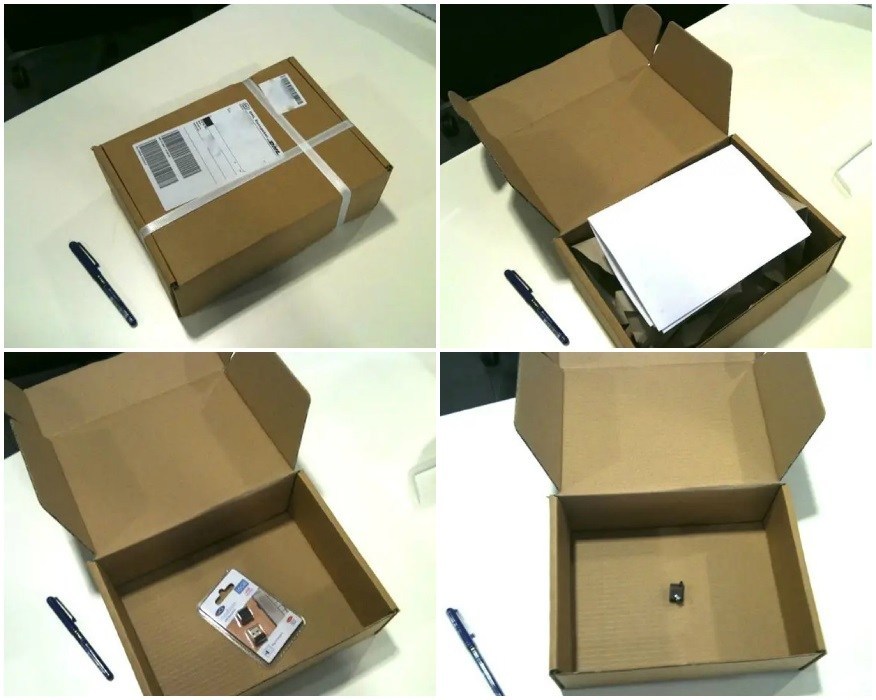